The actions ofAlphabet (GOOG.US) were dragged down by the disappointing results of Snap (SNAP.US) July 21. Snap sent a shockwave through social media that affected all advertising-based technologies. But we won’t know if Alphabet has the same problems as SNAP until it gives us its report tonight after the closing bell on Wall Street.

Investors track an important metric for Alphabet: traffic acquisition costs (TAC) or what amounts to the same, the expenses incurred by the company to obtain quality and real traffic, on its pages, for a later monetization. Over the years, Google has been able to reduce its traffic acquisition costs and, in any case, keep it stable. It is estimated to have increased by 12.65% to $12.3 billion. If the company releases a higher than expected TAC, the market would view it negatively.

Analysts have adjusted their estimates of Google’s advertising revenue down from $58.3 billion recently. Even though revenue estimates have been lowered, they are still at the high end of the range as of mid-2021, indicating that analysts do not yet expect a significant slowdown in advertising activity. ‘Alphabet, setting a high bar for the company to overcome.

Overall revenue and profit estimates haven’t been adjusted much either. So if there are any external pressures from weakening ad sales, at least for now, they’re not reflected in earnings or revenue estimates, which means Alphabet only has only one option: it must deliver this quarter and beat these high forecasts. 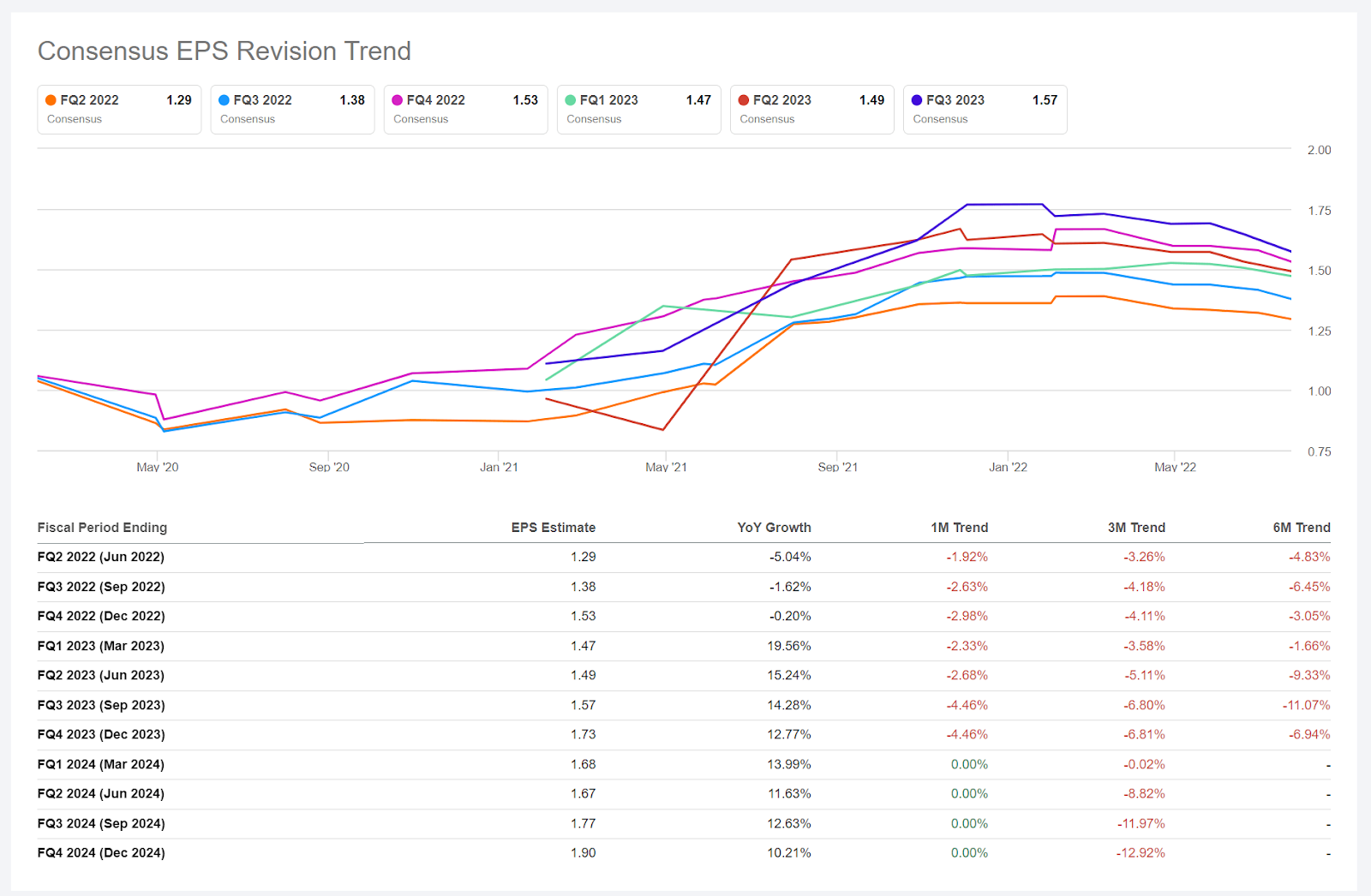 Looking ahead to Alphabet’s second quarter results, sentiment is weak. For reference, since the start of 2022, analysts have consistently downgraded the company’s EPS estimates to reflect macroeconomic challenges and likely tougher competition for advertisers cutting ad budgets. As a result, Google shares are down about 22% year-to-date. As we can see in the picture above. 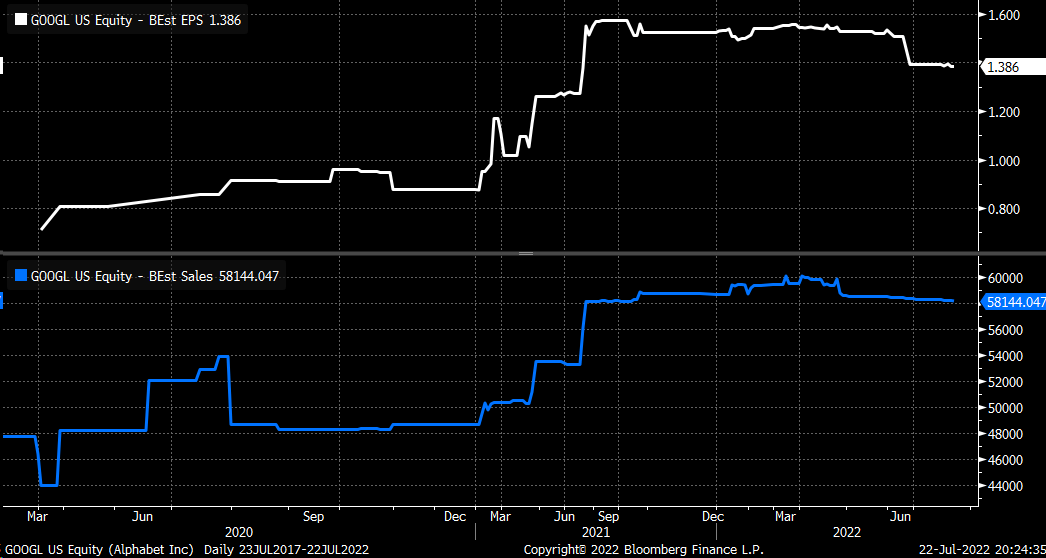 Are Google stocks cheap or not?

Yet something is wrong with the stock right now, as it has fallen in step with the market and looks very cheap, trading at just 16.6x earnings estimates for the next twelve months and trading at the bottom of its range. historical. Even adjusted for its expected long-term growth rate, the PEG ratio is only 0.70x, well below 1x, while the price-to-sales ratio is around 5.5x. Both are at the bottom of their historical range and look cheap.

This gives investors two options: either the stock is incredibly cheap, or the market fears that future earnings and earnings forecasts are too high and need to be adjusted lower. Even the recent split in its shares from 20 to 1 has not been a significant boost, despite the fact that liquidity and trading have increased significantly.

For reference, the results of the second quarter of Netflix (NFLX.US) weren’t spectacular. In fact, given the company’s track record of strong growth, an 8.6% increase in depressed earnings estimates is arguably positive. However, the sentiment around Netflix and the streaming industry was so depressed that the stock appreciated more than 15% in 5 days when the results were simply less bad than the market expected. 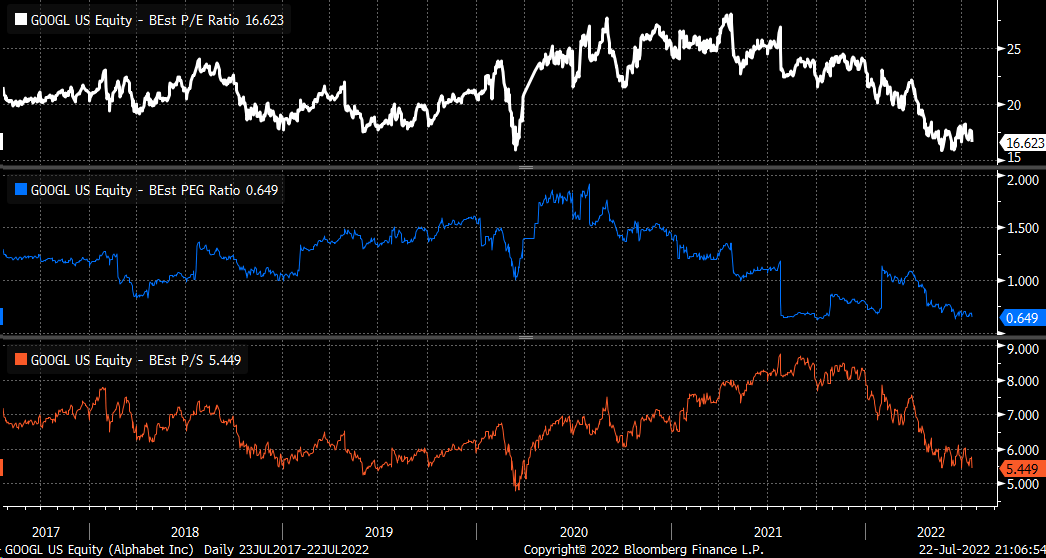 Investors therefore fear that the company will publish disappointing results on Tuesday or consider the growth forecasts too high. Alphabet’s technical side is very weak, with a long-term bearish trend in its relative strength index (RSI). Additionally, shares have been consolidating sideways since early May, between $100 and $120. This sideways consolidation formed after the stock suffered a significant decline. This creates what appears to be a technical pattern known as a descending flag that could cause the stock to drop significantly. Where the support level to watch on the downside would be $100. If this level were to be lost, the decline could extend to $90.

Alphabet has seen fantastic growth in recent years and has a bright long-term future, given its dominance as a search engine as well as in advertising and its growing dominance in streaming services. However, this does not mean that the company is not prone to problems from time to time. The stock may be entering one of those tough times right now.

Looking ahead to Google’s second quarter results, sentiment is weak. For reference, since the start of 2022, analysts have consistently downgraded the company’s EPS estimates to reflect macroeconomic challenges and likely tougher competition for advertisers cutting ad budgets. As a result, Google shares are down about 22% year-to-date.

On the other hand, Google announced a $70 billion share buyback program in the first quarter of 2022. This represents 5% of the company’s total market cap. On April 20, 2022, Alphabet’s board of directors authorized the company to repurchase up to an additional $70 billion of its Class A and Class C shares in a manner deemed to be in the best interests of the company and of its shareholders, taking into account economic cost and prevailing market conditions, including relative prices and trading volumes of Class A and Class C Shares.

Recall that in the first quarter of 2022, Google still had more than $134 billion of cash and cash equivalents on the balance sheet and that the company will likely take advantage of the decline in the share price to buy back many more shares at the future. While there’s no downside to the company expanding the program in the future, there’s a compelling upside if Google does. In any event, a 5% share buyback program should provide significant support for the company’s valuation.

When it comes to results, there are two main risks: Firstthere is, of course, the possibility that Snap’s results are not isolated, but rather a guide to the entire digital advertising space. Secondlyit could be that even if Google exceeds expectations, the market remains worried about the company’s performance in the second half of 2022. In this case, investors would probably look to take advantage of the current price and sell now that the results are in. .

That said, Google’s predictions will be important. But the converse also needs to be considered: despite Google’s weak earnings offering, investors will take the opportunity to buy the stock price pessimism simply because it’s about Google.

Google shares are trading at a 12-month P/E of around 19.5x. That’s too low for a high-growth FAAMNG stock like Alphabet (Google).

“This material is marketing communication within the meaning of Art. 24(3) of Directive 2014/65/EU of the European Parliament and of the Council of 15 May 2014 on markets in financial instruments and amending Directive 2002/ 92/EC and Directive 2011/61/EU (MiFID II) Marketing communication is not an investment recommendation or information recommending or suggesting an investment strategy within the meaning of Regulation (EU) No. 596/ 2014 of the European Parliament and of the Council of 16 April 2014 on market abuse (Market Abuse Regulation) and repealing Directive 2003/6 / EC of the European Parliament and of the Council and Directives 2003/124 / EC, 2003/125 / EC and 2004/72 / EC of the Commission and Commission Delegated Regulation (EU) 2016/958 of 9 March 2016 supplementing Regulation (EU) No 596/2014 of the European Parliament and of the Council with regard to standards regulatory techniques relating to the technical modalities of objective presentation of r investment recommendations or other information recommending or suggesting an investment strategy and for the disclosure of special interests or indications of conflicts of interest or any other advice, including in the field of investment advice, to meaning of the law of 29 July 2005 on trading in financial instruments. (i.e. Journal of Laws 2019, item 875, as amended). All the information, analyzes and training provided are provided for information purposes only and should not be interpreted as advice, a recommendation, an investment solicitation or an invitation to buy or sell financial products. XTB cannot be held responsible for the use made of it and the resulting consequences, the end investor remaining the sole decision maker as to the position taken on his XTB trading account. Any use of the information mentioned, and in this respect any decision taken in relation to a possible purchase or sale of CFDs, is the sole responsibility of the end investor. It is strictly forbidden to reproduce or distribute all or part of this information for commercial or private purposes. Past performance is not necessarily indicative of future results, and anyone acting upon this information does so entirely at their own risk. CFDs are complex instruments and come with a high risk of losing capital rapidly due to leverage. 79% of retail investor accounts lose money when trading CFDs with this provider. You need to make sure you understand how CFDs work and can afford to take the likely risk of losing your money. With the Limited Risk Account, the risk of loss is limited to the capital invested.